by The Starling Radicals 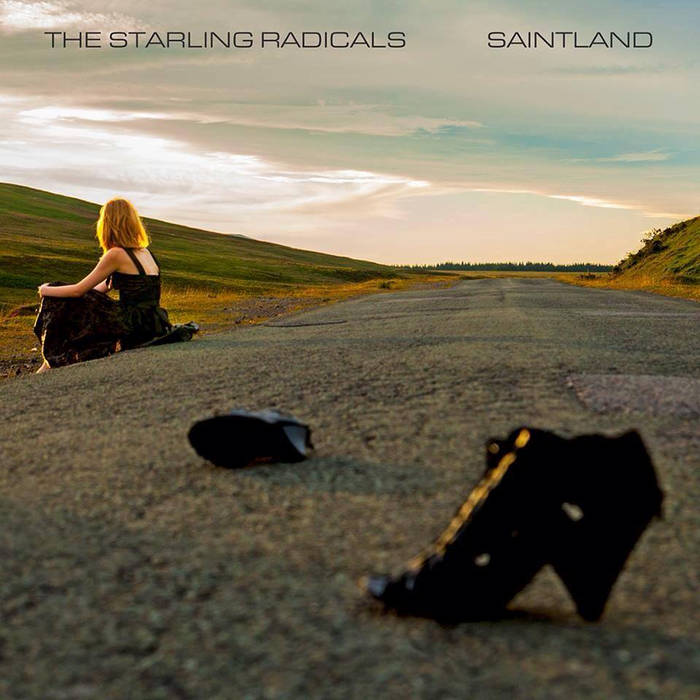 "A person who had no one would be well advised to cobble together some passable ghost." - Cormac McCarthy

The Starling Radicals are an indie-rock trio from South Wales. We formed online in 2013.

Track Name: Mona Lisa Vampire
The smile of a woman who dines on man
Older than the following eyes; you can’t see her hands
Or the rocks that surround her, or the hand of the imp up her skirt
Mona Lisa Vampire


Given up on Jesus, never really tried
“Kneel and drink the blood of the child you crucified”
Wear him round your neck, like a coke-tin noose
You Mona Lisa Vampire


Lay down hay for the jesters
Build the mob an altar, give them rocks to throw
Arbeit macht frei – pleasure chains us
Let’s build a bypass over this shithole
Just like my nothing, my art and my blood
My false icons belong to me
Cocaine cholera, poor man’s Pepsi
Mine and mine alone
They’re mine and mine alone
Mine and mine alone
Track Name: Dead Robin Red
A bed as artificial defilade
Curtains shut to keep the shame contained
Oh what a thrill, all this time to kill

So tiring sitting doing nothing, drinking evening,
Wishing suffering could sing a sweeter spring
Dead-robin-red could ring in
Wondering where to begin


Who needs another given name
To wither day by day, and sleep your life away
Hey yeah, just sit and wait and waste away


Not just talking about lethargy
But a sad soul deciding not to be
Given the choice: use or lose your voice

Tells the story of a sorry strike for glory
But the solitary wary, dead and buried with no bravery,
They vanish with their history

Street walking, like to see the sights
The Pharmacy got Christmas lights
Still November – That’s the tour
Since the neighbours went away again


House over, dog’s named after mine
Weird owner, hound tails right in line
Know where to find ‘em, town’s a show


Between the dead and the blind
A crocodile smile don’t go un-noted, oh no
We'll take the bottles and pills
And run to the hills to dig our fortune over


That’s around about all in the village worth writing down
Track Name: Just an Animal
In the pit I learned to play
Go ahead punk, make my day
Sucky sucky, love you long time
Indifference a friend of mine


'What the hell' speaks the truth
In independent solitude
Sure I refuse to be myself
I refuse to be like you
Track Name: Moon
Here we go again
Maybe this time I can be Sundance
Not that I'm tired of the leading role
But this thing has come alive and I'm dead on my own


Throw anything anywhere to strike a better man than I, sir
Paid for it a thousand times


But if there's new worlds in a hair in a locket
Then I'll be fine, never mind of the world outside
How come Major Tom got a rocket and all I've got
Is what I want to say to the world outside?
"Hello", "Goodbye", "Au revoir", "Shwmai", "Nos da", Goodnight"
The world outside, I've changed my mind
I'll stick around a little while


But if there's new worlds in a hair in a locket
Then I'll be fine, never mind of the world outside
How come Major Tom got a rocket and all I've got
Is what I want to say to the world outside?
"Hello", "Goodbye", "Au revoir", "Shwmai", "Nos da", "Goodnight"
The world outside, I've changed my mind
I'll stick around a little while
Track Name: Devil in a Party Dress
She's been walking the wall
Working her nights on the market stall
Nothing to do, nothing to sell to you
But the butt of her cigarette

And you've been growing a beard
Keeping it quiet for nineteen years
And she understands, but she doesn't want no man
She's the devil in a party dress


And if you asked for a name
If she could tell you then she might say
'We are many, and sure we're friendly
But I'll never be the one that got away'

Son, you're chasing Judas
Chaplain walks in disapproval
Still the dead got it good
Move to California
Let her have her moment for tonight
In the morning you'll feel right
And let the devil walk again
Track Name: Tricolour Blues
On the back of my mind she etched a thin sillhouette
Smoking, pale and pretty like a sweet cigarette
If you told me there were eyes in the back of those shoulders
I would believe you by the way that she smoulders


She must be French, Dutch
Anything but anyone but mine
Much more than what she came here for
Moonlight in her eyes, midnight in her mind
She's my tricolour blues killing me too soon
Baby take your time


I'm telling you bus stops are gonna be the death of me
Next time I'll take a blindfold so there's no was I can see
The bonnie behind filling up the eyes of the blind-to-be
I live to play live, no I don't die for the dawn debris


She must be French, Dutch
Anything but anyone but mine
Much more than what she came here for
Moonlight in her eyes, midnight in her mind
She's my tricolour blues killing me too soon
Baby take your time


I'l bide my time
And waste away in the firing line
Whenever comes tomorrow
Is nothing gonna make it alright?
Track Name: Unseen Empire
To have is to hate
According to predictive texts of everlasting nothingness
You say you’d like to love, but it’s too late
The age at which we understand is getting older every day

But the men who quoted the man – “who craves not these things, you are reckless” –
Are back shooting rabbits in town, so you’d better watch out
They’re our generation terrorists

Isn’t it ironic to think it’s untrustworthy to blink
When all we count for is nothing more
Than a blink of an eye? We should open our eyes
But there’s some things we don’t want to find


The stars are guaranteed
The safety of a thousand feet dug in deep beneath our feet
Don’t they know they are the ones
We should be keeping on a ‘lectric leash to be all we’d have to outrun?

Let ‘em water it down, spread the fires around to believe in
Take a casual stroll through the lunatic bin
And see faith does not prove anything
Track Name: The Glassblower's Manifest
Do daughters grow up
When their sons learn to love
Or must we still wait for now?

So try, understand
That your love is only sand
And the shape of this land too must pass

You are time fading out
Just a grain waiting to drown
With a realm, castle and crown made of glass
Track Name: Bennett The Wheel
Proud Queen Mary suffered on match day
Streets fell out and saints fell into readymade shadow
And Friday followed

Performed the sin with somebody's sister
Seawater's warm in the winter
In my fiction...

Cellophane wrapping in '42 a South Welsh summer for Waterloo
Playmate for me, payday for you
I am the lord of my own afternoon

From Bennett The Wheel, "Happy Grenada day!
To 1970s gay men - you don't own the cut-off short,
Or dirty talking"

High as the moon - hit me with the lambswool
Eyes are making me bashful
Just a spoonful...

Cellophane wrapping in '42 a South Welsh summer for Waterloo
Playmate for me, payday for you
I am the lord of my own afternoon

Four-score minutes to fill these shoes
And pay this city the love they're due
Da iawn - a dirty crown, who knew

If every wish was a horse or bride
Then every beggar and thief would ride
And fall dying halfway to the moon
I am the lord of my own afternoon
Track Name: Little Boy
I am not a bottle on your wall
I am not prepared to take the fall
When you look at me do you see anything that I don’t see?
Should I be proud of me?


When I was nine years old
I stole my mother’s life, I’m told
I was only looking out
For this lonely little boy


I’m a little boy, I’m nothing to you
I’m ashamed of the change I’m going through


I want this world to think that I’m cool
With all my pained expressions I learned at school
When the curtain falls will I be thought of happily at all?
Will I deserve my role?


I’m a little boy, I’m nothing to you
I’m ashamed of the change I’m going through
Track Name: Eton Mess
You there, boy, show me your hands
Have you washed today, young Snow?
"Yes Akela, matron, Mother Maggie, to the bone
Behind the ears and everything, we're all as good as gold
And Nick and David both agree our soul to you is sold"


My dear boy, I'll die one day
And you will speak to them for me
And tell them how I taught them all
To want to be like you and me


You'd take away a child's choice and make him go to school
Like silencing a people's voice so one less mob to rule
I let them keep their silly games, I let them sing their songs
So it would never cross their minds that all the rest was gone

A woman walks a thin red line
Between the beauty and the bitch
But I am not a woman, John
And they will burn me as a witch


So take a look, you naughty boys, but naught's between my legs
The death of the indigenous was nurtured at my breast
There's nothing left to purchase, poison, govern or address
But the broken and the beaten forced to eat this Eton mess

Bandcamp Daily  your guide to the world of Bandcamp